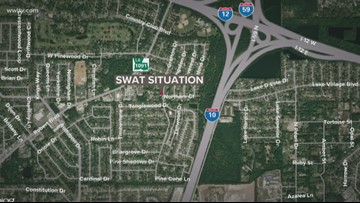 SLIDELL, La. — Authorities say shots were fired during a standoff with a SWAT team in Slidell on Monday afternoon.

A man threatening to kill himself and others was holding a weapon when police arrived at the scene, a Slidell Police Department spokesperson said.

Monday morning, police went to the Country Club Subdivision after reports of gunfire in the area, and they found the gunman on Northam Court. They said he was homicidal and suicidal.

The gunman barricaded himself in his house and became more hostile toward police, the spokesperson said. A SWAT team was called to intervene and they were able to detain the gunman.

Slidell Police Chief Randy Fandal said the Slidell community has been dealing with more people who have mental issues or PTSD recently.

“For the fourth time this year, our SWAT team was used to defuse a situation involving a homicidal or suicidal subject,” the police chief said. “Each one of these encounters could have turned deadly, but our officers were able to defuse each situation in the most peaceful manner possible.”

The gunman was treated for minor injuries and had a mental exam, police said. Slidell investigators are working closely with doctors to make sure the gunman receives treatment.

► Get breaking news from your neighborhood delivered directly to you by downloading the new FREE WWL-TV News app now in the IOS App Store or Google Play.

‘Gunsmoke’ Actress Amanda Blake Hid The Truth While They FilmedStandardNews

Every NFL Stadium, Ranked From Worst to FirstNew Arena