A new report from the Legal Services Corporation, which provides grants to legal aid organizations, highlighted just how much groups are able to do with sparse resources — and how low the compensation is for attorneys doing vital work.

According to LSC’s By the Numbers report released last week, salaries for legal aid attorneys lag far behind those paid to attorneys in private practice, especially those at large BigLaw firms.

“Legal aid lawyers as a group are the lowest paid lawyers in the profession,” LSC President James J. Sandman said. “But they are doing God’s work. These are people who serve the most fundamental legal needs of people who cannot afford a lawyer. I think they’re heroes, and I think they’re underappreciated.” 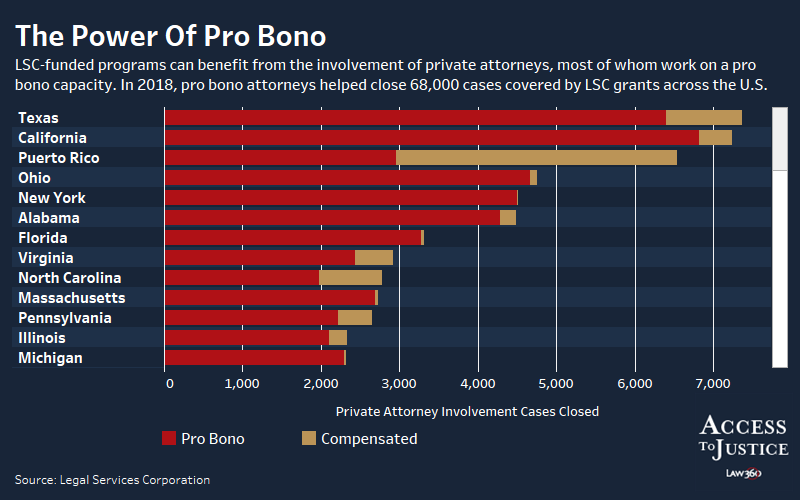 Meanwhile, the starting salary for a first-year associate at a BigLaw firm is typically over $150,000, with some firms offering up to $190,000 for first-year attorneys, especially those living in major cities.

While it isn’t surprising that attorneys working for nonprofit groups would receive less pay, the size of the discrepancy — and the low salaries in general — is concerning, Sandman said.

Attorneys often graduate law school with substantial student loan debt. According to Law School Transparency, which tracks data related to law school, law school tuition at a public university costs an average of $27,000 per year for in-state students, and costs $47,000 on average at private universities as of 2018.

The LSC report, however, highlighted how much these attorneys and the organizations they work for are able to do, despite the comparatively low salaries.

Across the 132 legal aid groups supported by LSC, attorneys closed 743,000 cases, including over 200,000 family cases and over 200,000 housing-related cases. Overall, 1.8 million people live in households benefited by LSC grantees in 2018. And while some of those cases were handled by private attorneys volunteering their time, about 89% of all cases were still resolved by nonprofits’ staff attorneys.

In addition, 1.5 million people got help from these legal aid groups at court help desks and similar services, and 11 million people total visited the groups’ websites, which often contain educational resources, according to the report.

However, Sandman highlighted, there are a total of 55 million Americans who are eligible for LSC-funded legal aid assistance, and legal aid groups do not currently have the resources to help them all.

“By the Numbers is a report of people who were served,” he said. “It says nothing about people who weren’t served. … You have to look at both together.”

In some cases, state legal aid funding has made up the gap. While LSC funding tends to account for about a third of the money its grantees receive each year, state and local grants also make up about 24%, according to the report. 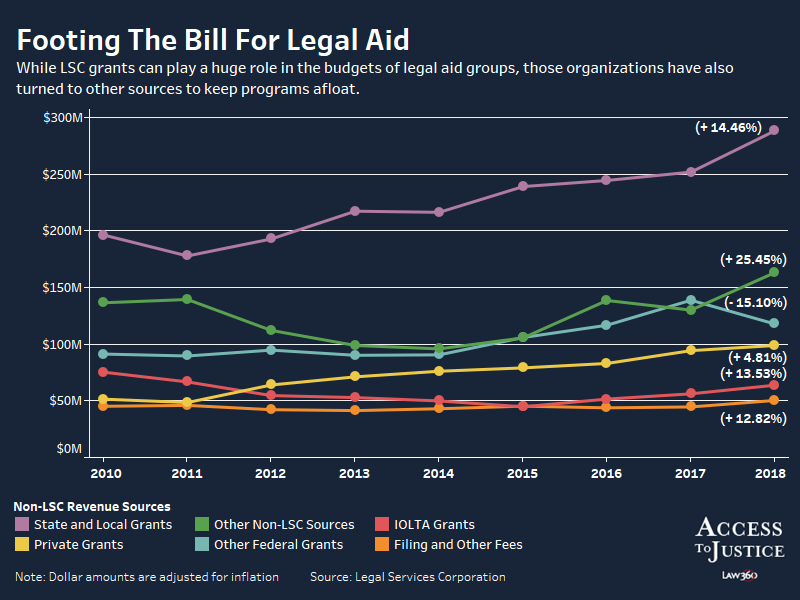 The amount of money coming from states has been increasing for several years now, the report said. However, Sandman pointed out that the amount of money available varies widely by state. While some states, such as New York, Minnesota, and Texas, provide a sizable amount of funding, other states, don’t provide much relative to the number of people in the state in need of legal aid.

In fact, the report showed, some states, including Delaware, North Dakota and Indiana, cut the amount of legal aid they provided in 2018.

“Beyond the numbers,” he said, “I think it’s important to look at the substance of what legal aid programs do. They handle cases that involve the basic issues of any society.”

Have a story idea for Access to Justice? Reach us at accesstojustice@law360.com.