Breaking News
WWL-TV has a new app, download it here! 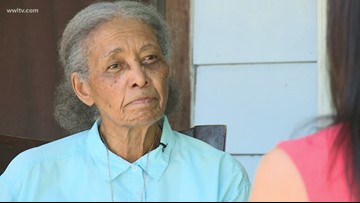 “I want to ask him: What on earth happened that a simple stop come to this? It comes to one person dead and another person shot,” Eva Spicer said.

MANDEVILLE, La. — When given a chance to speak, Eva Spicer chose to apologize.

The grandmother of Mark Spicer, the 21-year-old man accused of killing Mandeville captain Vincent Liberto and wounding officer Ben Cato said she is still in shock.

“I could have almost passed out,” Eva Spicer said. “You don’t even figure him to do something like this. I’m just totally sorry.”

Eva Spicer says she learned about the shooting Friday night when a relative broke the news.

“I don’t know why it happened. Believe me, I couldn’t believe when they said little Mark did this, I said ‘they must be joking,’ then he said ‘No.’ That’s what my oldest son told me,” she said.

What she doesn’t understand is why.

“Not even in school, I don’t think there was any,” she said.

Eva Spicer says her grandson comes from a hard-working family, graduated from Saint Paul High School, played rugby for Springhill College but left early and then went to Southeastern University before dropping out.

“No, no history of mental illness,” she said, when asked about Mark Spicer’s mental state.

Eva Spicer says she hasn’t had a chance to speak to Mark but she wants to.

“I want to ask him: What on earth happened that a simple stop, because he didn’t have a license plate on the car, come to this? It comes to one person dead and another person shot. You have to ask him because you don’t know what to say why it happened,” she said.

Eva Spicer said in addition to wanting to talk to Mark, she wanted to go to the police department to express her sympathy.

RELATED: ‘We need to give back something:’ Mandeville comes together for fallen officer Vincent Liberto

► Stay in the know with Southeast Louisiana’s top stories to start your workday. Sign up for the 4 Things to Know email newsletter to get headlines delivered to your inbox. Click here to sign up!

Born Billionaires: Kyra Sedgwick is One of the Richest Heirs in AmericaInvesting.com